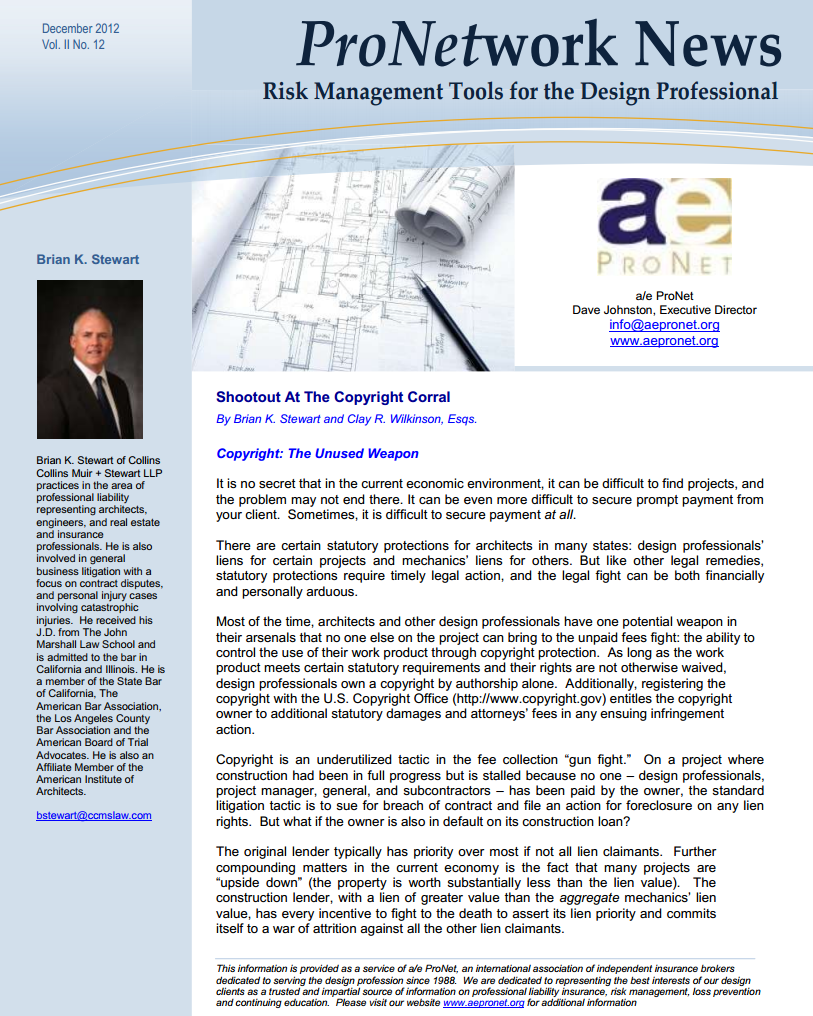 Most of the time, architects and other design professionals have one potential weapon in their arsenals that no one else on the project can bring to the unpaid fees fight: the ability to control the use of their work product through copyright protection. As long as the work product meets certain statutory requirements and their rights are not otherwise waived, design professionals own a copyright by authorship alone. Additionally, registering the copyright with the U.S. Copyright Office entitles the copyright owner to additional statutory damages and attorneys’ fees in any ensuing infringement action.

Copyright is an underutilized tactic in the fee collection “gun fight.” On a project where construction had been in full progress but is stalled because no one – design professionals, project manager, general, and subcontractors – has been paid by the owner, the standard litigation tactic is to sue for breach of contract and file an action for foreclosure on any lien rights. But what if the owner is also in default on its construction loan? END_OF_DOCUMENT_TOKEN_TO_BE_REPLACED

In this video, you can watch the construction of a 30-story apartment building in less than 3 minutes. That’s the beauty of time-lapse technology. But the reality is also super fast. The apartment building, comprised of 30 floors built in sections, “each measuring 15.6 by 3.9 meters, with a depth of 45 centimeters,” was built from the ground up in just 15 days.

“Zhang Yue, founder and chairman of Broad Sustainable Building, is not a particularly humble man,” writes Lauren Hilgers in her recent piece for Wired magazine. “A humble man would not have erected, on his firm’s corporate campus in the Chinese province of Hunan, a classical palace and a 130-foot replica of an Egyptian pyramid. A humble man, for that matter, would not have redirected Broad from its core business—manufacturing industrial air-conditioning units—to invent a new method of building skyscrapers. And a humble man certainly wouldn’t be putting up those skyscrapers at a pace never achieved in history.”

The efficiency made possible by this copy-paste style of construction could change the way whole cities are designed in China, the country with the highest population in the world. But what impact will it have elsewhere? And what are the risks of such speedy construction?

“In 2003, China’s Minister of Railways, Liu Zhijun, took charge of plans to build seventy-five hundred miles of high-speed railway—more than could be found in the rest of the world combined… With a total investment of more than two hundred and fifty billion dollars, the undertaking was to be the world’s most expensive public-works project since President Eisenhower’s Interstate Highway System, in the nineteen-fifties. To complete the first route by 2008, Minister Liu, whose ambition and flamboyance earned him the nickname Great Leap Liu, drove his crews and engineers to work in shifts around the clock, laying track, revising blueprints, and boring tunnels… When the first high-speed line débuted with a test run in June, 2008, it was seventy-five per cent over budget and relied heavily on German designs.”

On July 23, 2011, lightning struck a signal box outside the city of Wenzhou, and gave one of the high-speed trains a green light rather than a red on. The resulting crash killed 40 people and injured 192. It was this tragedy that forced China to take a closer look at what turned out to be a highly pressurized process, hobbled by the corruption of government officials, as well as the illegal practices of wealthy citizens.

Sacrificing oversight and transparency for speed is a concern, especially since China is already in the architecture world’s line of fire these days due to frequent accusations of copyright infringement (Creative China, Cutting and Pasting?). In a recent example, the New York Daily News wrote, “Already famed for fake designer bags and pirated DVDs, imitation in China may have reached new heights with a set of towers that strongly resemble ones designed by renowned architect Zaha Hadid.”

But Hadid might be the first to remind her counterparts that the existence of China’s specific market, even taking into account the political structure and shaded history, is beneficial. She has worked extensively in China, crediting the country as a major influence on her evolution and success as an artist. In a November 2012 piece published by Newsweek, author Melinda Liu quotes Hadid as saying, “Every country has its local requirements. In China, the requirement is to be big. Where else can you get this scale? That’s its Chineseness.”

Whether this latest exercise in speed and efficiency will be primarily positive for the world of architects, engineers, and builders remains to be seen.