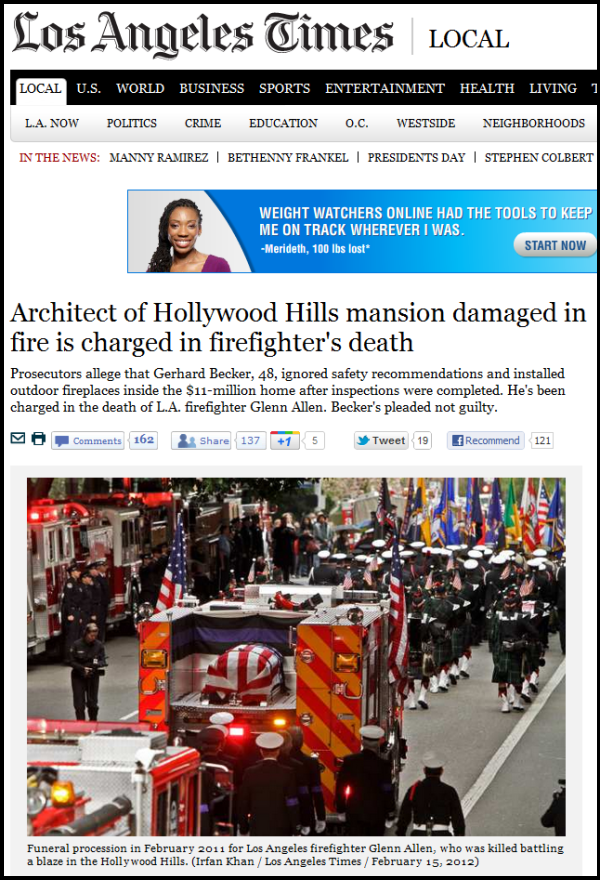 On February 16, 2011, more than 80 Los Angeles firefighters responded to a blaze at a 13,500-square-foot mansion in the Hollywood Hills; the home, valued at $11M, was slated to be the backdrop of reality TV show Germany’s Next Top Model later that same month. As the fire spread, the second and third floors partially collapsed, burying veteran firefighter Glenn Allen under hundreds of pounds of lumber and plaster debris.

Though Allen’s colleagues were able to dig him out with chainsaws, the firefighter ultimately succumbed to his injuries; he died two days after the fire.

As reported by the L.A. Times, “Building inspectors said Becker had told them there were no plans to build fireplaces in the home, and none were spotted during a final inspection. After the fire, investigators discovered that he had installed four outdoor fireplaces inside the home, a violation of city building codes.”

This is a case worth watching for design professionals as it is, according to Southern California attorneys Brian Stewart and Ryan Harley (both of Collins Collins Muir + Stewart LLP), “the first time in memory that a designer (or contractor for that matter) has been charged criminally with manslaughter in connection with design or construction of a building.”

The following is an excerpt from a short article released by CCM+S which provides a brief explanation of the allegations:

“After a year-long investigation, Mr. Becker was recently charged by the District Attorney with one count of involuntary manslaughter in connection with the death of Mr. Allen. As used here, involuntary manslaughter is defined as an ‘unlawful killing which takes place during the commission of a lawful act, which involves a high risk of death or great bodily harm, that is committed without due caution or circumspection.’ See California Penal Code section 192(b)(2). Acting ‘without due caution or circumspection’ is akin to criminal negligence, and basically amounts to reckless behavior which a normal prudent person would not have engaged in under the circumstances. For comparison, this is the same statute which was recently used to convict Michael Jackson’s doctor Conrad Murray.”