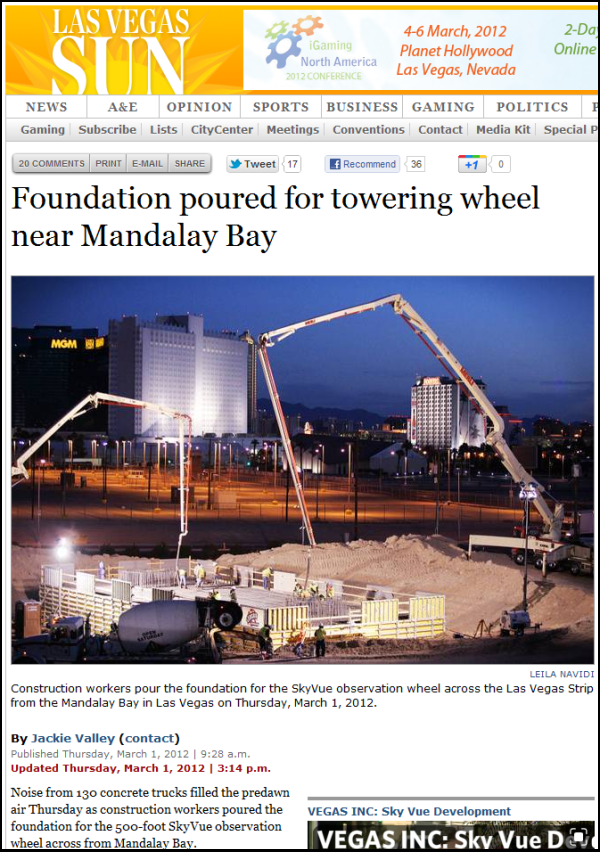 There’s something happening in Vegas, and we’re happy to break the rules and share the event here. Construction began in earnest yesterday on the new 500-foot SkyVue observation wheel across from Mandalay Bay, a project for which ProNet client Wallace Morris Surveying, Inc. is providing engineering services.

More than 100 concrete trucks rumbled in before dawn on Thursday, March 1 to pour the foundation. Per the Las Vegas Sun:

The five-hour process, which began at 2 a.m., sets the stage for building the $200 million project that will change the landscape of the southern Las Vegas Strip.

Developer Howard Bulloch said passersby would see the wheel take shape this summer but the venue won’t open until July 2013.

“We have to build the wheel first before we build the retail building below,” he said.

The retail portion will include seven food-court options, five sit-down restaurants and a dozen stores ranging from clothing outfitters to electronics, Bulloch said. Developers declined to identify the establishments but said they would be recognizable names.

A 30-minute ride will take visitors 50 feet higher than Mandalay Bay with views facing north on the Strip.

The construction climate in Las Vegas has been notoriously sketchy since the global economic downturn in 2008, but Bulloch is pledging to see this project through to completion. Certainly, the SkyVue Observation Wheel will be a flashy ornament to the legendary city’s skyline, including 32 gondolas, each seating 24 people, and a 50,000-square-foot LED sign which will project from the wheel’s center. But better still, the wheel will ultimately employ a full-time staff of 500. Click here to see renderings of the envisioned project.

Wallace Morris Surveying, Inc. (WMS) is dedicated to delivering professional land surveying services throughout Nevada and Arizona with a highly skilled professional team working together. It is also our mission to exceed your needs by dedicating to you a Professional Land Surveyor with years of surveying experience, respecting your need for timely services and by having the expert you hire be the actual person working on your survey. (Excerpted from the firm’s bio on the WMS website.)