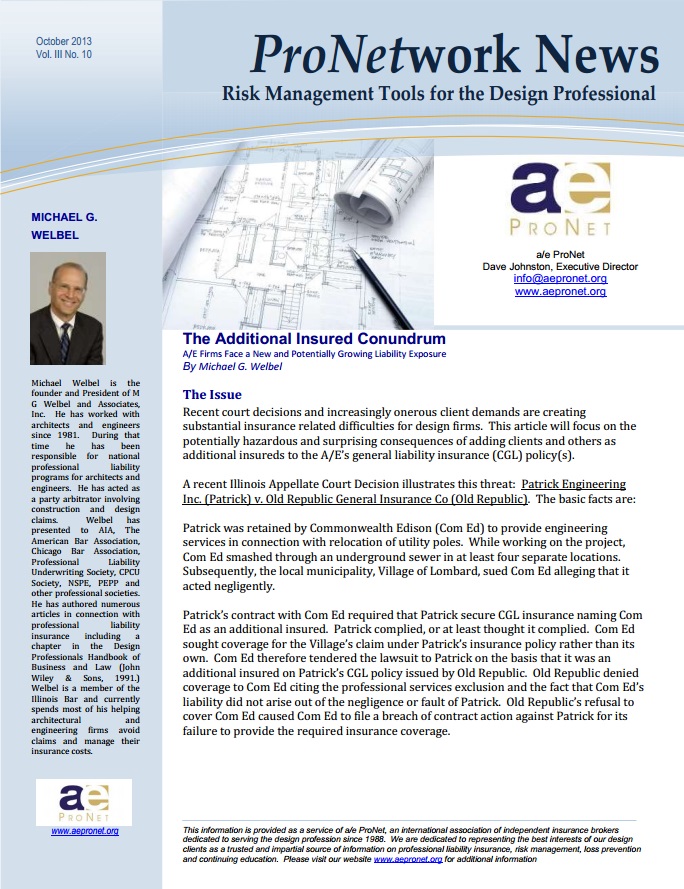 So, you’ve scored a new project! This is a shining moment. The road before you vibrates with the potential for creativity and ingenuity. You receive the contract in your email. Double-click. All you have to do is sign on the dotted line. Scroll, scroll, scroll. Insurance Requirements?

Oh boy. You’d better send this one over to your insurance broker for a quick review.

At lunch, you sketch ideas on the back of your napkin, dying to get started. Buzz! Your phone trembles on the table. It’s your broker and, sadly, she didn’t just give you two big thumbs up. Nope. Turns out, the Insurance Requirements include the following line:

Client shall be named as Additional Insured under CG 20 10 (85) or equivalent.

No-can-do. This endorsement is obsolete. But your new client wants it!  And so you’re face-to-face with the eternal and confounding Additional Insured Conundrum.

Does this scenario sound familiar to you? You’re not alone. The following excerpt from our October 2013 issue of ProNetwork News may be able to help:

Recent court decisions and increasingly onerous client demands are creating substantial insurance related difficulties for design firms. This article will focus on the potentially hazardous and surprising consequences of adding clients and others as additional insureds to the A/E’s general liability insurance (CGL) policy(s).

Patrick was retained by Commonwealth Edison (Com Ed) to provide engineering services in connection with relocation of utility poles. While working on the project, Com Ed smashed through an underground sewer in at least four separate locations. Subsequently, the local municipality, Village of Lombard, sued Com Ed alleging that it acted negligently.

Patrick’s contract with Com Ed required that Patrick secure CGL insurance naming Com Ed as an additional insured. Patrick complied, or at least thought it complied. Com Ed sought coverage for the Village’s claim under Patrick’s insurance policy rather than its own. Com Ed therefore tendered the lawsuit to Patrick on the basis that it was an additional insured on Patrick’s CGL policy issued by Old Republic. Old Republic denied coverage to Com Ed citing the professional services exclusion and the fact that Com Ed’s liability did not arise out of the negligence or fault of Patrick. Old Republic’s refusal to cover Com Ed caused Com Ed to file a breach of contract action against Patrick for its failure to provide the required insurance coverage.

Patrick found itself in a very unenviable situation. First it needed to defend itself in the breach of contract action due to the coverage position taken by its insurer over which it likely had limited, if any control. It was then forced to sue its own insurer in an effort to establish coverage under its own policy for a problem that it did not cause. At the end of the day, Patrick wins its case against Old Republic. This, however, is a Pyrrhic victory for Patrick. On one hand Patrick is able to satisfy its contractual obligation to its client but on the other hand will carry the burden of the loss under its own coverage for years.

To continue reading, down the full PDF version of The Additional Insured Conundrum, which explains a bit about the evolution of Additional Insured Endorsement ISO CG 20 10 and the problems that typically arise when contracts require an earlier version. For early access to these excellent newsletters, or if you have questions about what you’ve read here, contact your local a/e ProNet broker today.

Michael Welbel is the founder and President of M G Welbel and Associates, Inc. He has worked with architects and engineers since 1981. During that time he has been responsible for national professional liability programs for architects and engineers. He has acted as a party arbitrator involving construction and design claims. Welbel has presented to AIA, The American Bar Association, Chicago Bar Association, Professional Liability Underwriting Society, CPCU Society, NSPE, PEPP and other professional societies. He has authored numerous articles in connection with professional liability insurance including a chapter in the Design Professionals Handbook of Business and Law (John Wiley & Sons, 1991). Welbel is a member of the Illinois Bar and currently spends most of his time helping architectural and engineering firms avoid claims and manage their insurance costs.

A Fond Farewell & Thank You To Audrey Camp

For over seven years a/e ProNet had the good fortune of retaining Audrey Camp’s services.  Audrey has authored the a/e ProNet blog,…