Bellevoir is a historic home in Lyndon, Kentucky. The house was built ca. 1867 and added to the National Register of Historic Places in 1980. The Italianate-style home was built by Hamilton Ormsby, a member of a prominent family in Jefferson County. When it moved to the old Ormsby family farm, the home became Ormsby Village, serving dependent and delinquent children. The site originally had a separate home and school, Ridgewood, for African-American children.

Segregation ended in the early 1960s, and both homes were merged into the Ormsby Village Treatment Center in 1968, serving only delinquent children. It closed in 1979.

The buildings were used by Jefferson County government for offices during the 1980s, until the property was developed as an office park. The institutional buildings were razed and the Ormsby family home, Bellevoir, was preserved.

Added to the National Register of Historic Places in 1980.

Jennifer Stieben  is a recipient of the 2022-2023 David. W. Lakamp Scholarship. She worked this past summer on an independent study project for the Historic American Buildings Survey. 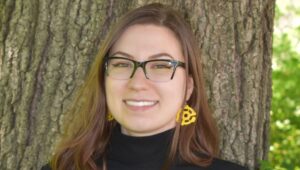 “This is an independent study project I completed over the summer of 2022 under the direction of two professors. I created several drawings that were based on existing conditions for the Historic American Buildings Survey, so this is different from the more conceptual work from my undergraduate degree.

Aspects in risk management in this project would be making sure construction details and dimensions are correct on the building as well as the site. If there is any new construction here, there is going to be reference to existing drawings and any unexpected details could hold the project up in terms of time, cost, and even safety. Conveying information accurately and clearly to the viewer is important.“